It snowed six inches last night and getting to work took almost three times longer than usual. Silly me thinking the spring was here.

I don’t think I’ve posted this before so below’s a story I adapted years ago from a Finnish original to some of my English-speaking friends. No idea where the original came from and Google doesn’t find the original, so here it is. I feel the story captures the relationship many Finns have with snow quite nicely.

This morning when it snowed for the first time this year I checked my diary for my feelings last year from the the same period.

December 1st It’s 2 PM and snowing. The first snow is so beautiful. The nature becomes glowing white and the spirits rise as it’s not so dark anymore. I drank hot rum toddy with my wife, sitting by the window and looking at the snowflakes fall slowly from the sky, covering the trees and the ground. Words fail to describe the beauty outside.

December 2nd I woke up and looked out the window. Everything was covered by crystal clear fresh snow. What a glorious sight! Every tree and bush has a white cape. I cleared both the yard and the pavement of the snow for the first time this year and enjoyed every swing of the shovel. Later during the day a snowplow cleared the streets and pushed all the snow into the front of my gate. The driver smiled and waved and I waved back as I started to clear the front of the gate again.

December 3rd Last night it snowed six inches and the temperature’s a couple degrees below zero. The trees in the front of the house lost a couple branches due to the weight of the snow. Cleared front of the house of snow. As I finished the snowplow came. This time the snow was brown and grey.

December 4th The weather got warmer, the snow melt and then froze and got slippery when the temperature dropped again. I fell on my ass on the ice and felt something snap. The clinic only charged 50 euros and fortunately nothing was broken. Weather forecast says more snow is on the way.

December 5th It’s still cold. I sold my wife’s car and bought her a jeep so that she’d be able to get to work. My car slid and hit a rail and the right front corner got trashed pretty badly. It rained close to seven inches lash night. Streets were salted to melt them down and now both the cars are covered with salt and dirt. Cleared front of the house of snow. The goddamn snowplow drew past our house twice today. I somehow fail to be grateful for all their extra work.

December 6th Ten degrees below zero. More of that bloody snow. The yard doesn’t have one tree or bush that isn’t damaged. The electricity was cut almost the whole night. I tried to keep the house warm using candles and a gas generator. I splashed some of the gas on the floor and on top of myself, got it lit and almost burned down the whole house. I did manage to douse the flames but got second degree burns on my hands and lost all my facial hair. I lost control of the car while driving to the clinic and broke it apart totally.

December 7th There’s more of that white crap coming down all the time. I have to wear every single piece of clothing I have to go to the mailbox. If I get my hands on the asshole driving the snowplow I’ll rip his heart out. I bet he’s behind a corner spying on when I’ve cleared the way! The electricity is still out. The water pipes froze and it looks like the roof won’t take the weight for long.

December 8th Six new inches of that f**king snow and sleet and ice and Lord only knows what the shit was that fell out of the sky last night. I tried to hit the snowplow driver with an ice pick but he escaped. My wife left me. The car won’t start. I thing I’m getting the snow blindness. I can’t move my toes. I haven’t seen the sun in weeks. The forecast promises more snow. The wind make the air really, really cold. Oh f**k it, I’m moving to Spain. I’m so pissed off! The f**king snow and the whole winter.

I spent a week in Catalonia on holiday. First a couple days in Barcelona and then driving around the Pyrenees on a Prius from Hertz. What a car! The fuel economy really was pretty good, especially considering we drove up & down the hills quite a bit. I’d love to get a hybrid for my next vehicle so there’s hoping Toyota gets the next Prius done by the end of next year when my lease runs out.

Going to the mountains was definitely the best part of the holiday. Barcelona was packed full of people even though it’s not the tourist season. In the mountains the weather was excellent and the nature was just amazing – flowers were blooming everywhere and the medieval villages were incredibly beautiful. The photo is taken on a wooden bridge under Castillo de La Roca, a medieval village built on top of a lava surge from the last volcano eruptions in Garrotxa some 11 000 years ago.

Shots of Catalonian dragonflies are now posted to Flickr, of course. 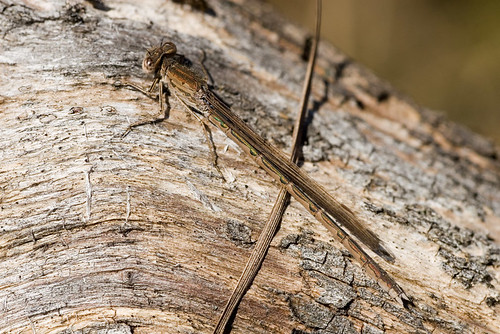 The year’s first dragonfly sightings were done yesterday. This is quite exceptional – we beat the old record for the fist sighting by nearly a month. That is to say, we can really feel the global warming in Finland right now.

The species is Siberian Winter damselfly (or Sympecma paedisca) which is quite exceptional as a dragonfly species in that it hibernates over the winter as an adult. The other species are sitting down in frozen ponds as larvae. The early flight is the result of this way of hibernation, the adults take flight immediately when the temperatures reach 12-13 degrees celsius. Other dragons have to wait until the water temperatures go up which takes considerably longer.