See below for two studies on vitamin D and diabetes. The short of this is, giving children and pregnant women 50 to 100 ug of Vitamin D supplements / day is probably a very good idea.

The current recommended dose of vitamin D supplements in most of the west (10 µg/day) is based on the smallest dose found in studies to prevent rickets. Two of the studies below look at dosages that are sufficient to increase the vitamin D levels to that of people living near the equator, where the incidence of diabetes approaches zero!

So, while 50 to 100 µg/day is 5 to 10 times higher than the official recommended dose in most the western countries, this a safe amount as the vitamin starts to be poisonous at around a thousand times larger does than this (the recorded poisonings are from people who confused micrograms and milligrams and consumed thousand times larger doses than recommended for extended periods) and given the vitamin D level required to give protection against diabetes seems to be that occurring naturally near the equator, it doesn’t make any sense to consume less. 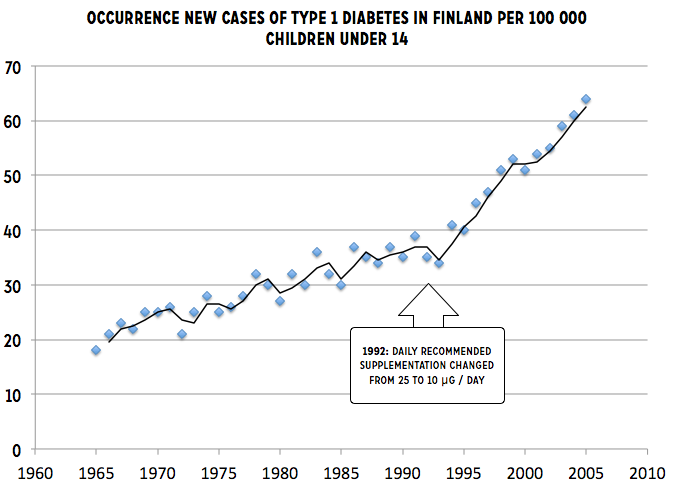 Now, I’m not saying vitamin D is the holy grail and that deficiency (as compared to the levels found on the equator) is the only contributing factor on diabetes, but it does look like the current recommendations are actively contributing to Finland having the highest occurrence of type 1 diabetes in the world.

To determine whether serum levels of 25-hydroxyvitamin D (25(OH)D) in young adults are associated with risk of type 1 diabetes mellitus (T1D), we conducted a prospective, nested case-control study among US active-duty military personnel with serum in the US Department of Defense Serum Repository, identifying 310 T1D cases diagnosed between 1997 and 2009 with at least 2 serum samples collected before disease onset and 613 controls matched to cases on age, sex, race/ethnicity, branch of military service, and dates of serum collection. Conditional logistic regression was used to estimate rate ratios and 95% confidence intervals. Among non-Hispanic whites, those with average 25(OH)D levels of ≥ 100 nmol/L had a 44% lower risk of developing T1D than those with average 25(OH)D levels < 75 nmol/L (rate ratio = 0.56, 95% confidence interval: 0.35, 0.90, P for trend = 0.03) over an average follow-up of 5.4 years. In quintile analyses, T1D risk was highest among individuals whose 25(OH)D levels were in the lowest 20% of those measured. There was no association between 25(OH)D levels and risk of T1D among non-Hispanic blacks or Hispanics. Low 25(OH)D levels may predispose healthy, young, non-Hispanic white adults to the development of T1D.

In other words, the study looked at both health individuals, as well as military personnel who’d developed diabetes, went back to get blood samples that had been collected in previous years and retroactively checked the vitamin D levels to determine if vitamin deficiency correlated with the likelihood of getting type 1 diabetes. The study concluded there is a correlation for non-hispanic whites. Based on this research, the vitamin D level should be at least 100nmol/L.

Intake of vitamin D and risk of type 1 diabetes: a birth-cohort study

Very long term (1966 to 1997) Finnish study that found adequate level of vitamin D protects against type 1 diabetes. Note that in this study, the children were supplemented with 2000 IU of vitamin D daily, while the recommended dose for children in Finland has since been reduced to 400 IU, which seems to have resulted in sharp increase in the occurrence of diabetes.

Vitamin D and pancreatic islet function. I. Time course for changes in insulin secretion and content during vitamin D deprivation and repletion.

The association between ultraviolet B irradiance, vitamin D status and incidence rates of type 1 diabetes in 51 regions worldwide