Update: It’s now being reported iOS 5.0.1 is being released soon, and it’ll add the multitasking gestures to the 1st generation iPad. Looks like people at Apple realised they screwed up, and are correcting the mistake. Case closed.

One of the nice new features promoted by Apple for iOS is the Multitasking Gestures which allow you to swipe from app to app. They’ve been testing this on iOS 4 for a long time, and I’ve used them quite a bit on my iPad 1. I’ve especially been using the 5 finger pinch to exit an app, and four finger swipe up to show the app switch menu. The feature was only available to developers in the past, but became available to all users at the launch of iOS 5.

Except it didn’t, Apple killed the feature on iPad 1 on iOS 5’s release version.

I’m guessing this was a last minute decision on Apple’s part, since they launched iOS 5 with a page describing the features that said the features is available on “iPad”, indicating both iPad 1 and iPad 2 were supported. Apple has now silently changed the features page to say the feature is for iPad 2 only, but the UK site and other international sites are still carrying the original page. 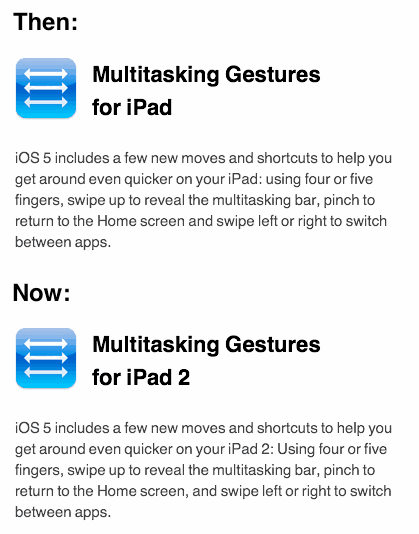 So, nice little fail from Apple’s part that’s infuriating the early iPad adopters. I can see why they chose to not support the side swipe from app to app which wasn’t 100% smooth, but it completely beats me why the pinch to exit and 4 finger swipe up were eliminated, as they simply replicated the behavior of the hardware button. So – Apple – could you please add the feature back, and give the users the choice on activating it or not, the way it used to work?