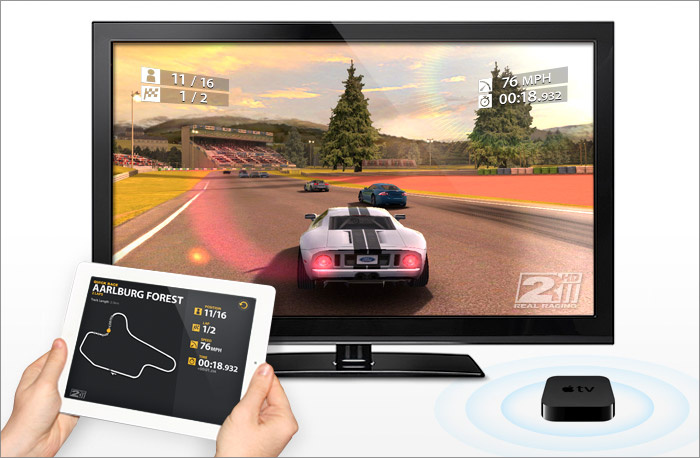 Kotaku’s E3 news had an interesting article about Real Racing 2 HD getting support for Airplay streaming in the fall when iOS 5 comes out.

I think this is pretty big.

AFAIK the change that iOS 5 brings along is, a TV connected to an iDevice over AirPlay will become just another screen for iOS apps. It’s not just for streaming videos anymore, it’s now a screen, where you can draw things as if it was the main display on the device.

So what does this mean for consoles? Trouble! For $329, you can get an iPod Touch and an Apple TV, and play easily available, affordable, games on your TV, using a wireless touch-screen controller with sophisticated motion detection and video capabilities.

This is effectively what Wii U promises to do, except it’ll be available in the fall. And probably be cheaper. With cheaper games. And more titles. And an existing, large set of devices out in the market, where most people just need to plunk the $99 for the Apple TV, rather than purchase a whole new console.

Most people won’t even need to purchase multiple controllers, since if you have an iTouch, it’s quite likely your friend has one in his pocket when he comes to visit. And his save games and player profile are in his device as well, so there’s no data portability issues, as with current generation of consoles.

If this wasn’t enough, your games will tweet high scores as well, for maximized virality.

Apple is also expected to update iTouch in early fall with significantly higher graphics performance, and Apple TV to include Full HD support – both perfect for this type of games.

As a game developer, this is going to be SO awesome.

1 thought on “Apple’s plan to take over the console”